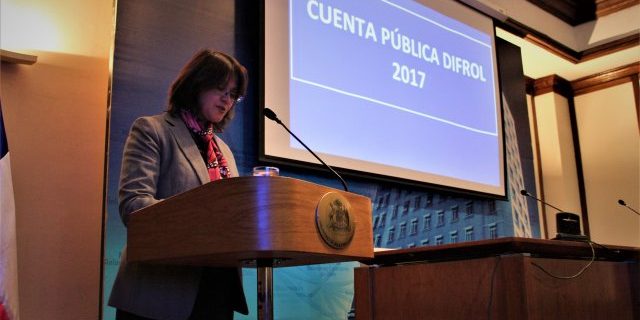 On Friday, the Director of State Borders and Boundaries, Ambassador Ximena Fuentes Torrijo made a Participative Public Account of the agency, corresponding to the year 2017.

At the beginning of her presentation, Ambassador Fuentes emphasized that “the institutional mission of DIFROL is to preserve and strengthen the territorial integrity of the country, providing professional and technical advice to the Government through the Ministry of Foreign Affairs”.

The Director thus placed importance to the excellent neighborly relation we currently have with Argentina, which is reflected by the numerous Integration and Border Committees (amounting to seven in 2017), as well as by a series of technical coordination instances between both countries.

With regard to Peru, Ambassador Fuentes highlighted the opening of the new Integrated Checkpoint of Santa Rosa – Chacalluta and the holding of the first binational cabinet of ministers from both countries in Lima on July 7, 2017.

In connection with Bolivia, the Director called attention to the resumption of the Border Committee after being inactive for six years. During 2017 two such instances took place; the first in Santa Cruz, Bolivia on July 25, while the second was held in Arica on October 12 and 13. In addition to these two meetings, Chile and Bolivia reactivated a series of coordination instances in the sphere of border integration, which – as the Director assured – “report on a quiet integration and that, thanks to the work both Committees has done, we have been able to collaborate in a better border service for the citizens who live in that area”.

Another matter that the Director highlighted was the role of DIFROL in the technical arrangements that allowed creating the Patagonia Park System. “DIFROL arranged a series of authorizations for legal actions that take place in border areas; in this context, the matrix of the official drawings of the Presidential Patagonia Park System were reviewed and authorized”. In this way Ms. Fuentes emphasized that “DIFROL contributed to the conservation of our country’s natural heritage”.

Regarding the specific role played by the Department of Boundaries, Madam Ambassador affirmed that 400 reviews of works and cartography with border references were carried out during 2017.

Along these lines, she highlighted the support DIFROL provided the Directorate for Antarctica, the National Committee of Antarctic Geographical Place-Names, the creation of Protected Maritime Areas, and the National Oceanic Policy.

Another topic mentioned in the Public Account was the importance of DIFROL in the evolution of the cases Chile faces with Bolivia at the International Court of Justice in The Hague. “During 2017 DIFROL contributed in the legal defense team, and provided studies and advisory services in the fields of our competence for the purpose of drafting the rejoinder that was filed in September 2017. Furthermore, in March of this year we provided financial, administrative, technical and legal assistance for the elaboration of the pleadings with the ICJ”.

Regarding the Silala Case, Madam Ambassador declared: “It is my honor to represent Chile as Agent, and the handling of this case is in the charge of the Unit of Shared Water Resources of this National Department”. She also highlighted the scientific work that this case involves, including a high-level multidisciplinary team formed by national and international experts.

Thus, the Director recalled that on July 3 of last year the Memorial of Chile was submitted to the ICJ jointly with the co-Agents Juan Ignacio Piña and María Teresa Infante. “It is substantial, well grounded, and demonstrates that the Silala River has been a river for thousands of years and that it crosses naturally from Bolivia to Chile”.

Lastly, Madam Ambassador focused attention to the development of the Continental Shelf Unit, the Free Movement Unit (created in 2017), and the Territorial Information Management Unit.