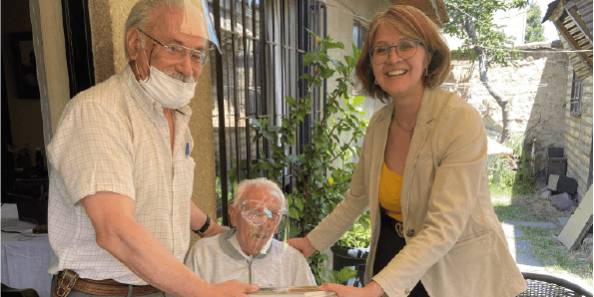 The outstanding historian and honorary director of the Chilean Society of History and Geography has donated many books and documents related to border and historical matters, among others, all of which were part of his life, and documents about the border and historical issues, among many others, all of which were part of his extraordinary personal library, and which today, are part of his
his outstanding personal library, and that today, in the twilight of his life, he has decided to donate to DIFROL so that they can be of use to new generations and for the thematic studies that he will
ages and for the thematic studies to be carried out periodically by our service.

Mr. Felix received different delegations from the Direction of Borders and Boundaries, headed by its director, Ambassador Ximena Fuentes Torrijo.
The Ambassador expressed her gratitude, mainly for users and beneficiaries of this documentary inheritance given in life by the historian. At the end of the meeting, she gave him a present to remind his life and highlight his disinterested act.
This gift is a scale replica of a boundary marker, which Mr. Felix received with great joy and emotion.

With his daughter, Mrs. Claudia Gajardo, and the library’s curator, Mr. Arturo Muñoz, Mr. Felix delivered two boxes with books and documents, containing a hundred books and records of the most diverse subject matters and characteristics.
The officials from the operations department of DIFROL’s Boundary Direction, headed by Mr. Sergio Ramírez, received the documents.
The cataloging process of the material will be slow because of its relevant content, which will allow that soon, the collection will become an integral part of our Documentation Center (CEDOC).

We thank Mr. Feliz Gajardo for his valuable donation, which contains bibliographic pieces of immense historical value, many of which date back to the 19th century.
We know that it has not been easy to get rid of them. Still, we reiterate our commitment to give the widest dissemination to this material and allow the fulfillment of the wish of its former owner to be fulfilled. We hope that many more, like Mr. Felix, will trust to send their works to our service to become part of our archives and part of the heritage of the whole nation.